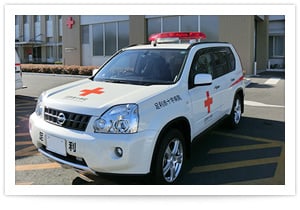 While ambulances are used to transport critically ill or injured patients to a hospital where they will receive care from a doctor, some situations (such as severe car accidents) can make it difficult to quickly transport the patient, or are so critical that having a doctor on-scene is crucial to the patient’s survival. In such cases, our “Doctor Car” (a.k.a. “rapid reponse car”) takes a medical team of doctors, nurses and in-house paramedics (as well as a full inventory of medical equipment and supplies) directly to the patient for treatment prior to transport to the hospital.
In 1991, Japan’s “pre-hospital” health care got a huge boost with the introduction of the paramedic system, permitting life-saving techniques with defibrillators, airways, adrenalin shots and more to be performed by trained paramedics on patients in cardiac arrest. But despite these improvements, paramedics are still limited in their ability to prescribe drugs or perform other measures which could be crucial to saving the life of accident victims, in particular. In addition, if a doctor is not on scene, they need to depend on a third-party description of a victim’s condition, which can also hamper effective care. By bringing doctors and other staff directly to the patient, these issues are solved. What’s more, an SUV can reach nearly any patient in any weather, and operational costs are far, far lower than for a medical helicopter.

Ashikaga Red Cross was the first hospital in Tochigi to begin operating a doctor car. Our custom-modified Nissan X-Trail SUV was rolled out in August of 2009, and covers emergency situations in six cities in the Ryomo region (Ashikaga, Sano, Ota, Tatebayashi, Kiryu and Midori). Typically, the car responds during regular working hours in situations such as where the patient is trapped, is in CPA (cardiopulmonary arrest), has suffered a high-energy injury or multiple injuries, has been badly burned or in some other condition where immediate care by a doctor is judged necessary for patient survival. In the years since the hospital began employing the car, roughly 75% of its dispatches have been for traffic accidents, workplace incidents, falls, drownings, poisonings and the like, and the other 25% have been for internal medical emergencies, such as strokes and heart conditions. The Car’s medical teams boast a 90% success rate in reviving CPA patients.
Besides the obvious medical benefits to patients of the Doctor Car system, the psychological impact for both patients and their families is high, too. Being treated by, and hearing an explanation from, a full-fledged doctor at the scene even before transport to the hospital does immeasurable benefit for people facing what could be one of the most difficult moments of their lives. Even for passers-by, seeing the Doctor Car in action can lend them a great sense of confidence and security about the community in which they live.
TOPへ戻る